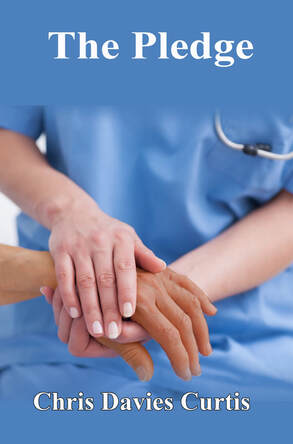 Sally, Hine and Tina meet for the first time as trainee nurses in a large English hospital. As they take the Nightingale Pledge, little do they realise they will also make a pledge of a friendship which will last the rest of their lives.

At first Sally, born to a wealthy family, chafes at the restrictions but then discovers her true calling, and the intriguing surgeon, Peter Phillips. Part-Maori Hine, has a secret. She is desperate to return to her home discovering unsuspected romance on the way. Feisty middle-class Tina is stifled by her doting parents and over-attentive suitor, Jerry. She longs to travel after her training. The reality proves a challenge when she accompanies Hine to New Zealand and meets her match in the red-headed Scott, David.

Set in the 1960s ‘The Pledge’ travels from England to New Zealand covering a shipboard romance, life in New Zealand, England and Scotland and gives a realistic view of nurses’ training and district nursing in that era.
The author spins a believable adult romance using her own extensive experiences from forty years as a nurse.
​