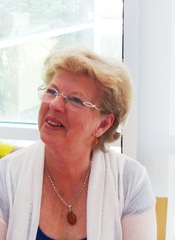 Coming late in life to serious writing, I have many adventures to recall. Training as a registered nurse in Birmingham, England, I met my future husband Ken on a pony trekking holiday. After four years we tired of life in London, so in 1966 we moved to the tiny feudal Island of Sark in the British Channel Islands.

In '﻿﻿So You Want to Live on Sark﻿'﻿, you can read how we bought a property and the trials and tribulations of opening a guest house and running a smallholding.

Seven years later we decided to have a look at New Zealand. Booking sea passage, with young son Roy we arrived in Auckland early in 1972. My second book 'From a Feudal Isle to Aotearoa' describes how, for two years we toured in a Bedford delivery van, taking jobs on the way as diverse as Matron of a hospital, running motels and driving guests around by horse and carriage.

My third book 'From Queen's Nurse to Godzone', tells of my district nursing experiences in London in the late 50's and in New Zealand in the 70's.

Emigrating to New Zealand in 1976 we found work, myself as District Nurse and Ken as beekeeper and orchardist. Sadly we went our separate ways in 1984. I returned to Sark to a new partner, and Ken stayed on in New Zealand with Roy.

For the next 24 years I remained on Sark, nursing privately, training as a Homeopath and running my own ‘Healthy Life Clinics’ in Sark and Guernsey. We traveled extensively, visiting such places as Africa, Seychelles, Canary Isles, the Caribbean Islands, U.S.A and Canada and returning to New Zealand many times. My fourth book 'So you returned to Sark' tells of those years.

After I nursed my partner through his illness with a brain tumour, as I had citizenship, I returned to New Zealand to yet another career of writing and illustrating my books, as sketching has always been a hobby.
I took a creative writing course with the NZ Institute of business studies, which was a great help.